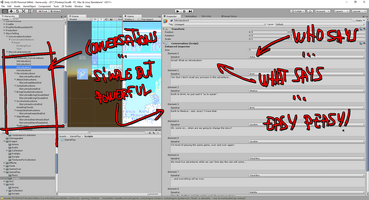 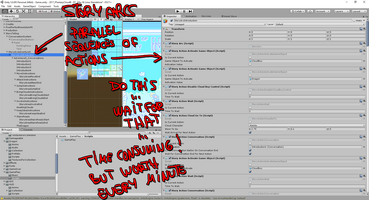 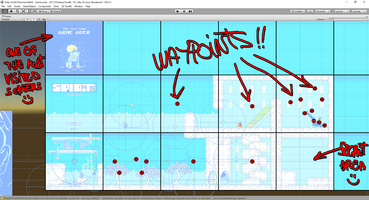 Today I feel quite happy :-) . Lot of work has been done in the past two weeks and quite some visits and downloads have happened to my little game. Thanks to WarpDoor and Rock, Paper, Shotgun for bringing in happy players :-D .

I'm working in the storytelling of the game, which will be the major feature for the next version. How did I do that? Three topics:

I implemented a very simple system based on Story Actions. Story Actions are derived from an StoryActionBase class which can be thought of as a line in a theatre script. By deriving this, I can implement different actions: tell an actor to go here or there, wait for the player to reach an area, enable or disable player controls, and (very important) play a conversation with a conversation balloon.

I use a simple yet useful technique to "write down" the script: adding Story Actions as components for the Story Arc, which will be executing them sequentially until no more Story Actions are available.

I'm using a really simple system I made myself here too. First, I defined a conversation, which is a sequence of an actor saying something, then another actor saying something else. The only difficult part here was to create a CustomEditor to be able to write down longer lines. Which I later discovered wasn't that necessary...

Then I prepared the ConversationBalloon behaviour, which can show any conversation by writing character after character and waiting for player input at the end of each conversation line. It will authomatically close on finishing... if I don't tell it to remain open after the conversation ends, which is useful to show in-game instructions!

With both systems roughly prepared, I started creating all the lines that define all that has to happen. So far there are 70 actions for less than a minute, and it took like 4 hours to "write" them down. Ok, I had to prepare new Story Actions now and then, as I usually code "on demand", but still that's quite a lot of time for the little game The Final Fantasy of Cloud Boy is.

Have you liked the implementation of the StoryTelling I have described here? Do you have any other approach you have used in your game? Please, leave a comment, I'll be really happy to hear about it!